This class has ruined me and my 17 classmates forever for storebought bread. The stuff we’re turning out of the kitchen from 7am-noon on Thursdays and Fridays has a way of getting mouths watering all around our school. From the moment the elevator door opens onto the third floor, all you can smell is freshly baked bread. So so good. Yesterday, I took home 6 loaves (my friends are more than happy to eat fresh baked breads!!) and the rest of the 100+ loaves we didn’t take home go to the restaurant downstairs.   Interested in trying to bake your own bread? From what i’ve learned, it’s not only very simple, but if you just abide by a few key rules, you’ll be baking fantastic homemade bread in no time.

Most important things to know:
1.  It all starts with yeast.  Make sure your yeast is fresh, and if you can get your hands on fresh yeast (looks kind of like a pound of butter but dark brown), it’s so much better and much easier to work with. Can be frozen for several months, so I’d recommend buying a block, chopping it into cubes of 10g each, and popping them in the freezer. With fresh yeast, you can use whatever temperature of water you like (not hot), and everything gets tossed into the mixer together.  (You can usually just ask at a bakery if they’ll sell you a block – here, they cost about $2 for a pound at a bakery).  No fresh yeast? No problem. Make sure the yeast you ARE using is fresh (it only lasts about 6 months). Make sure it is room temperature when you are ready to use it. Use it properly: some types of dry yeast are designed to be mixed right in with the flour (much easier), and some have to be dissolved in warm water to activate it. They say right on the package.
2. Use bread flour. Seriously, it makes all the difference in the world. Bread flour is a ‘hard’ flour, which develops it’s gluten much more strongly than all-purpose flour (which is a combo is hard flour and soft flour, which is apporopriate for cakes). In class, we rarely use AP flour, but like most people, kitchen space is at a premium so I use it at home. But, I do buy a small bag of bread flour (and pastry flour when baking a cake, since it produces a much more tender crumb).
3. Gluten is king. Gluten is formed by repeatedly kneading (with a machine and dough hook, or by hand with lots of elbow grease!!). Once it’s activated, the dough feels elastic-y and soft, and can be stretched a lot.  Why is it important? As the dough bakes, the yeast releases carbon dioxide into the dough. This air has to go somewhere. Because gluten is stretchy, the air goes up, and the stretchy gluten stretches enough (aka rises) to allow the air to rise without escaping. Without gluten, you just get little air bubbles (like in a cake, sort of). With gluten, you get nice and high loaves.  Without the proper flour, you won’t get gluten. Sooooo…..it’s quite important.
4. The process – simple.  The process is the same – exactly the same – for every type. The two important things: dump everything into the bowl, add the liquid, but reserve about 10% of the water. Watch as it mixes. A bit of the flour is always slow to get picked up by the dough hook, so when most of it looks doughy and there is a bit of flour still in the bowl, then you slowly pour that remaining water down. Wait too long though, and the dough will slide around and get too wet. It’s pretty simple, but you do have to keep an eye on it.  The other important thing is to let the dough rest properly. Usually an hour on the table (covered in saran wrap) right after mixing. Then cut it into portions, and let it rest for 10 min. Then punch it down, shape it, and let it proof (rise in a warm, moist place. I like to preheat my oven to it’s lowest temp, usually 150 degrees, and when i’m ready to let my dough proof, I turn it off, open the door to let almost all the heat escape. Put the bread in the just-warm oven (our proofers at school are around 85-100 degrees), and put a pan of hot water in the bottom for humidity.
5. Final touches go at the end. Only put the nice knife slash marks in the top of the loaves RIGHT before the oven. Not before.
It takes a bit of practice, but it is really so simple and tastes incredible. Right now I’m having a delish breakfast of multigrain sourdough we baked yesterday, with whole wheat flour, molasses, flax seeds, sunflower seeds, cracked wheat, and homemade sourdough starter (red grapes, water and flour, beaten together and fermented for a week. We grow it in our fridges at school!). So tasty! Take that, storebought bread.
If anyone decides to try baking some bread, let me know how it goes! 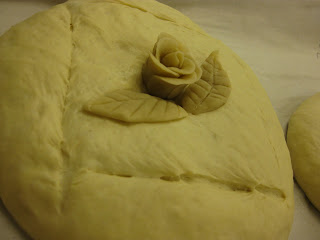 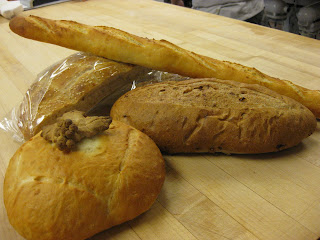 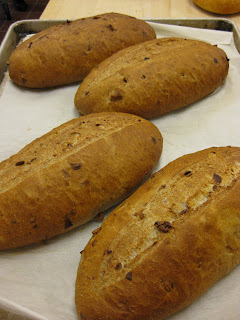 Quarter #3 (out of 4!) is well underway – the term started on tuesday, and I’ve already gone to 3 out of 4 of my classes. Here’s what the new semester brings:

1. Food and Beverage Operations – this is one of those lecture classes that all students (culinary and pastry) have to take. It’s a tad pointless for those of us wanting to be behind the scenes in the kitchen, but for down the road if I have my own place, it’ll be handy. It’s all about the front of house operations – staffing, dining room set up, etc. Meh. But, the part that interests me to no end is the fact that nearly HALF of the class is devoted to teaching us about wine! Seriously!!  (it’s because the chef never writes the wine list or decides what to purchase, but rather it is the dining room manager that does this). By the end of the class, we’re told we’ll have a wine vocab that goes far beyond, “mmm, it’s yummy”. Yes, that was a quote.  So far, F+B Ops gets an A for surprisingly fun content. This class is at 9am-12pm on Tuesday.
2. Cost Control – pardon my enthusiasm, but this class sucks. It’s all math (culinary math – costing, edible portions, figuring out what is a good deal and what isn’t, etc) and while important, is not the most exciting, especially from 6-9pm on Tuesday night. Blech.
3. European Cakes and Tortes – NOW we’re getting to the good stuff! Don’t ask my why this class is only 1 day a week (5 hours) as it needs more. The awesome thing about my kitchen classes now is they are all only for advanced pastry students, so no more of the kids from last term who really didn’t give a hoot about pastry, and didn’t know the most basic of basics which sort of holds everyone else up. So now, we get to do all kinds of stuff, pretty much everything in the syllabus is in french though. The way we roll is each week we do some mis en place (prep) for the next week, and do assembly of the stuff that was prepped the week before. Today, we made a coconut dacquoise, which is a round spiral of almond and coconut meringue, which we baked and will use next week for some sort of cake. We also made huge sheets of ladyfinger sponge (same as ladyfingers, but one big sheet), and out of our class of 15 we made 50 plain vanilla and chocolate sponge cakes, also for next week. The fun thing about this class is that we’re learning how to do things in ‘the real world’ now, rather than the classic ways we were taught last term. This means plenty of awesome short cuts.
example – to make a classic genoise (sponge cake that gets its volume from whipped eggs), it used to take about 20min of very careful steps, along the way there were plenty of places to screw up and let the cake volume deflate. Now? Dump every last ingredient into the mixing bowl, along with a small (carefully measured) blob of a vaseline-like emulsifier called “h22), which somehow allows the batter to work. No h22? no cake. It’s like magic – and only available commercially. Ah, tricks of the trade.
Last class – Artisanal Breads. I have this at 7am tomorrow morning (and 7am Friday morning) and other than hearing that we will make baguettes on both days every week (mmm!), not sure what this class entails. So with that, should probably head to bed – that 5.30am alarm comes way too soon.  But so far, I’m loving these classes (except math late in the evening) and i bet this term will fly by.