Our skills class had our practical exam on Wednesday and a written exam on Thursday, and once we finished that test, we got to do a black box competition. Black box is similar to Iron Chef where we have a mystery ingredient and a set time frame in which to create something.

We had two hours, and our final dishes would be judged on taste, appearance, creativity, use of special ingredient, and cooking skills. It would be judged by our chef, two other chef’s from the school, and the president of the BC Chef’s Association (who is in our textbook!)! Our mystery ingredient was pork tenderloin and fillets of sole (white fish) – we only had to use one. Not exactly a black box then (because in the true black boxes there are usually all sorts of other ingredients which you had to use) but definitely no complaints! Apart from those two proteins, there were an assortment of vegetables, plus we had flour, oil, etc.

I decided to use the pork, as it is less delicate than the fish, and honestly, I couldn’t think of anything to do with the fish. The hardest thing was deciding what to make, so as I planned out some ideas I started prepping a few ingredients. In the end, I decided to make a meditteranean-style pork roulade. For some reason I equate pork to heavy fall/winter dishes, especially German dishes where you’d eat it breaded or with sauerkraut. So, I decided to make a German dumpling called Spaetzle (kind of like pasta, but the dough is runnier and is boiled) and do a roasted red pepper sauce with it. For the pork, I roasted garlic and tomatoes, and I smacked the pork really thin, covered it in the garlic, tomatoes and basil, rolled it up and secured it with butcher’s twine, and grilled it before popping it in the oven. It looked really pretty when it was sliced up. Too bad it was still semi-raw on the inside, so I had to grill the individual slices to cook them through. Ended up with grill marks I didn’t want, but hey, at least it was cooked. The spatzle was awesome….in class we’d made it sauteed in olive oil and topped with cheese, but this was a much lighter way to enjoy it. 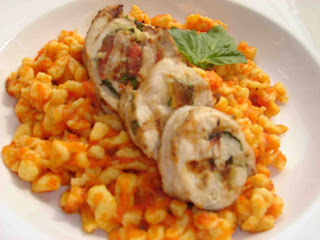 In the end, my friend Leslie (who made this amazing spaghetti squash ravioli with sole on top) and I tied for first place! She won overall in the end (there could only be one winner) because her pasta was incredible, but I was still pretty happy with the overall results. 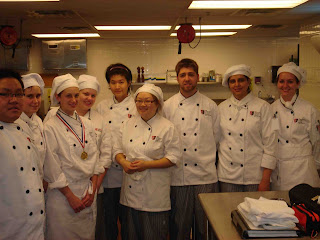 This was our class at the end, minus four people who weren’t there that day. Next time those whites get worn is in pastry class! (However, for Father’s Day today I made the best cheesecake ever – a S’Mores cheesecake, with graham cracker crust, rich chocolate filling, and marshmellowy-merienge like topping. It is incredible – recipe is in the current issue of Bon Appetit if you’re inclined to do a little baking!!!)

It sounds like you guys were hoping for a real ‘official’ winner….I wish that were the case to find the best ever type of chocolate. I was actually doing a comparison between the different levels of cocoa solids (the 70%, 85% and get this 99%) types. I actually really like the 85%. The more cocoa solids, the better. Haven’t tried the 99% though, just found it yesterday and at $4/bar  my class gets to be the guinea pig on that one, I’ll just sample it at the same time they do.

As for my personal favorite, hands down, Ritter is also my favorite. I found out about ritter in high school on my Germany exchange, and I think Ritter alone was to blame for about 1/2 of the extra 10lb or so that I gained there. So good. (The other half was due to the pastries – I didn’t speak German but did learn how to order pastries and learn the different types, so I felt better about my lack of language skills in the pastry shop. “Die eine mit die kirche, bitte” (don’t quote me, but you’ll get something delicious with cherries 🙂
My fave Ritter of all – the biscuit one, with the cookie inside. Oh, and the cornflake one is also awesome. And the coconut one. Oh man, now I want chocolate.