The summer started off on a roll with cake order after cake order and it has not.slowed.down. So amazing! I have been very lucky to have all types of different requests and couples looking for different styles

Most weekends I have 1-2 weddings, which is perfect for where life is at right now. After all, with two little ones at home, I want to be there for them! The kiddos go to a local home daycare on days when I need to work, but as the summer has gone along, they have been spending more and more time there. Luckily they adore their caregiver and have so much fun!

All summer long, I have had one BIG weekend looming closer and closet. Five cakes! FIVE. Now I didn’t actually take on that many cakes myself (that is a post for another time, but the short of the long is that I am helping out a bakery who become unable to fill their orders). So two orders were mine and three were theirs.

But last weekend, I did it, I survived, and now I get to relax on the easy side of the summer knowing that the crazy cake weekend is behind me.

How do you prevent yourself from taking on too much work?

**the most difficult culinary competition in the world, the Bocuse d’Or, occurs every year in Lyon, France. Countries that participate only get one entrant – so to be selected is an amazing honour (but it’s a lot of work!). The Canadian entrant is Chef David Wong, who is also a chef instructor at my school. Last week, they had a $200/plate fundraiser dinner at the Marriot hotel, as a fundraiser to cover some of Chef David’s costs for Bocuse.  The cakes we’ve prepared this term have all been carefully wrapped, frozen, and saved to use as the desserts for this event. Last week, it all came out of the freezer, and we spent 2 days finishing, garnishing, cutting and boxing up the cakes. 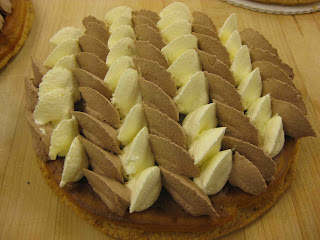 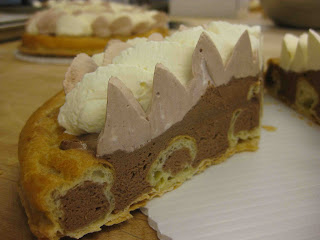 Inside the St Honore – there are spirals of the choux paste which bake up hollow, so we piped chibout into them, then smothered the whole thing in rich chocolate chibout (mousse + gelatin + whipped cream) 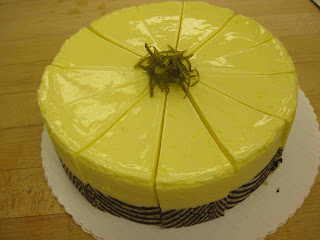 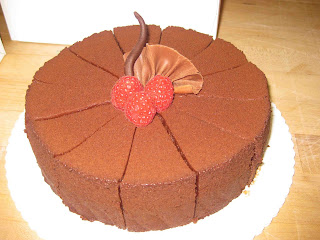 Amboise mousse cake: chocolate macaroon on the bottom and one partway in the middle, filled with chocolate mousse. This cake we sprayed while frozen with liquid chocolate, using an industrial paint sprayer. It makes it look like it’s been dusted with cocoa powder, but the chocolate shell is hard! 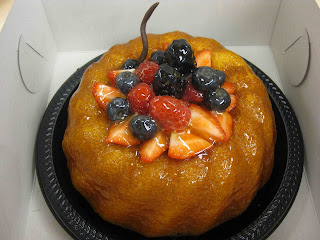 Baba –  a weird, yeasty dough. If you’ve ever had a cruller-style doughnut, that’s what this is like. Spongy inside, and it’s been soaked in a citrus simple syrup, and then doused in rum and brushed with apricot glaze. 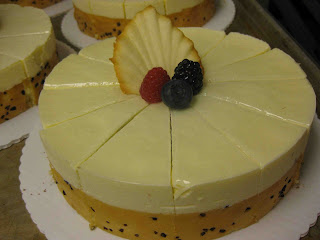 Le Sauterne – poached pear halves sauteed in wine and honey, topped with a light pear and wine mousse, with a ring of ladyfingers around the bottom. 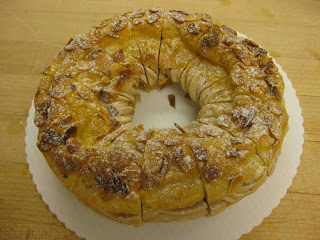 Paris Brest – three circles of choux, cut in the middle like a sandwiched and layered with rings of hazelnut mousseline 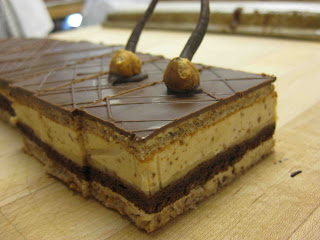 Mazarin – layers of roulade, hazelnut buttercream, chocolate biscuit (repeated twice), coated in milk chocolate. We also made Opera cake, which is the same except with coffee buttercream and a different type of biscuit 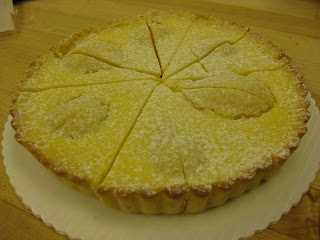 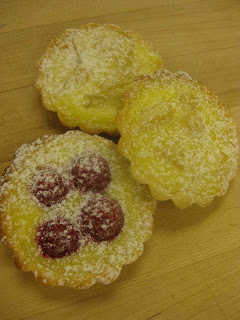 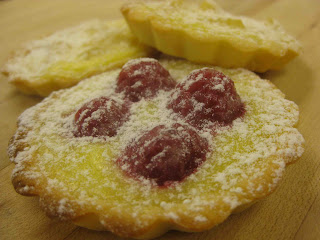 My team had some leftover pate sablee (sweet pastry) as well as leftover clafouti custard, so in bread class the next day we made mini tarts to use our leftovers. We made some raspberry and some pear, and dusted them with no-melt icing sugar. I boxed these up and we enjoyed them with afternoon tea on the weekend.
___________________________
Of course, we also have made lots of bread in the last few weeks. My mom has come into the city every couple weeks so I make sure to stock my parents freezer, and Brad and I just do our best to try to eat what we can while its fresh. Fresh bread, anyone? 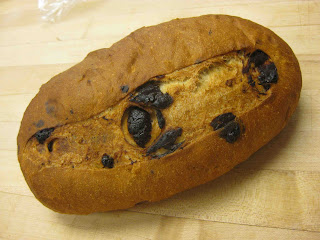 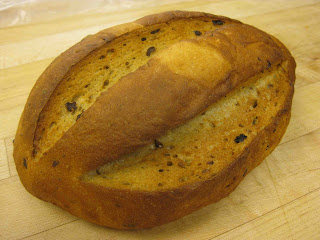 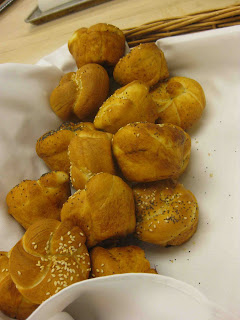 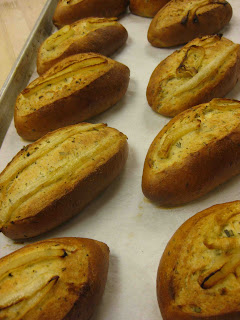 tender potato herb rolls. I brought 2 home and we ate tuna sandwiches on them for lunch while they were still warm, mmm! 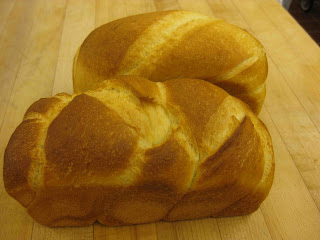 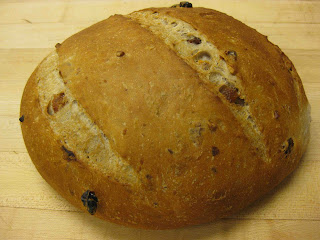 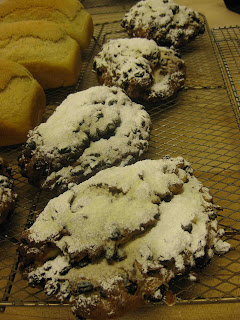 Stollen
Another day, another cake. Pastry class is two days per week, and we managed to make a lot of stuff this week!! While I didn’t bring anything home yesterday, today was just production, production, production (as well as a written midterm today!!). Before going to the photos, here’s what else we made this week:
– Ham and cheese croissants
– Chocolate croissants
– Sausage rolls (which were delicious, and those I didn’t finish I gave to a homeless guy)
– Apple turnovers
– Swiss roll
And now, onto things with photos: 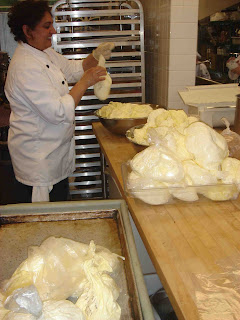 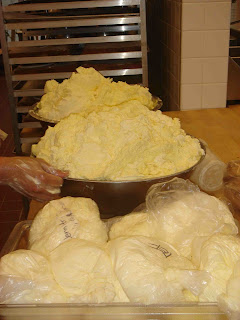 Which we later used to practice our buttercream piping. Already on each Wednesday class, we spend time working on our chocolate writing (i love it!!). Buttercream on the other hand, I don’t get along so well with it. We had to pipe 8 rosettes, 8 double rosettes, and 2 full lines of scallopped lines. I sucked at that one. My piping bag was covered in buttercream, and so although my hands are now super moisturized, I’d rather stick with the chocolate writing. 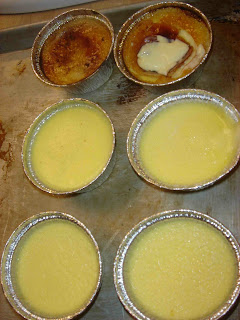 First dish today: creme brulee. I torched two (the top right one was already cracked for grading. The other one  I enjoyed during a Friends repeat tonight. The rest are waiting for my friend who missed class today, but will get them next week). The key to making extra yummy creme brulee is to do a thin layer of sugar, torch it, then put it in the fridge for a minute to cool, before doing a second layer. Chef Mela also recommends for the perfect crunchy top, is to spread brown sugar in a pan, leave it in the (gas) oven overnight so the pilot light will dry it out, and in the morning, blitz the sugar in the food processor. It’s the super dryness of the sugar that gives a really crunchy topping….regular sugar does have quite a lot of moisture. 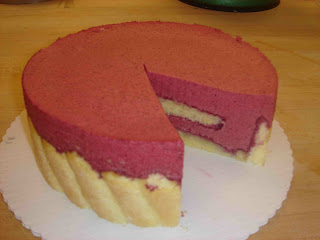 The first cake we made: this is a ring of homemade ladyfingers (around the outside), with a layer of kirsch (cherry liqueur)- brushed  genoise cake on the bottom. It is filled with a raspberry cassis (black currant) mousse, with another small layer of cake on the inside. 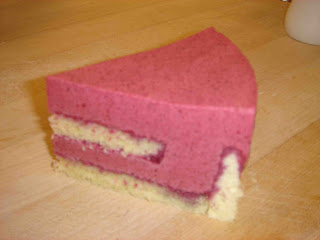 Slice of the cake. Chef made us cut it infront of her – specifically a 1/8 serving. No pressure. 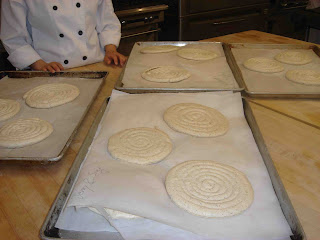 These are called “Japonaises”, essentially, a meringue made with egg whites/sugar/ground nuts. We used hazelnuts. It’s to be used for the following cake. You pipe it in a circle…. 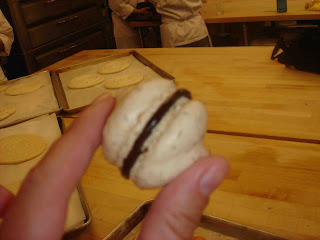 And with the leftovers you make little cute ones like these, which I dipped in ganache just for fun!! 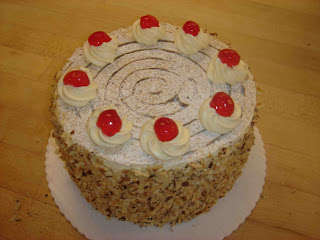 The final product: It has a layer of the Japonaise (hazelnut meringue) on the bottom, then a layer of kirsch-flavoured buttercream, then a 2″ thick slice of kirsch-brushed genoise cake, then buttercream, then a second Japonaise. The outside is coated in buttercream and sliced toasted hazelnuts, the top dusted with confectioner’s sugar, and rosettes piped on top.
Normally, we cook in partners so everything gets split in half. But my partner was gone, so not only did I do all the work today, I got all the product!!! My friend Jess was happy to unload some of the croissants from me (but not anticipating the rather large amount I gave her), but I needed to get rid of the 2 cakes as well. Definitely don’t want it at my house! En route home, it occurred to my that the neighbourhood fire department, right across the street from my house, would be a good bet. I let myself in, and soon enough had a dinner invite to join the boys next door for dinner, and they are more than willing to eat my goodies. A win-win situation!  (No, I won’t be going there for dinner, but I will continue to feed my neighbourhood firemen!).