After plating and presenting the aforementioned trout and sole (see below), we were in for a surprise. A few of us were excited, the rest seemed irritated. Whatever, I was excited.

There’s a show on cable here called “The Shopping Bags”, where these two hosts test drive products of all sorts. I’ve learned all kinds of things from this show, and the hosts seem to be a lot of fun.
So midway through class on Thursday (and we’re cooking ALONE for the first time as there was so much product we didn’t need to share!), Chef tells us we’re to plate and present at 9.45am instead of the usual 10.45am (!!!), because some supplier is coming in to have us ‘test drive salad spinners’. Okay, why? We don’t make salad…and we have class to do. But all feelings of annoyance dissipated once a camera crew came in to set up. Turns out, they are going to film a segment of the show, where they want us to test drive salad spinners on camera. Turns out they need four of us to be on camera, and my name was drawn along with 3 of my classmates. We had to sign our lives away, and soon enough were on camera, each situated behind one of 6 salad spinners (4 of us + the two hosts). They had a bowl of washed romaine and a bowl of washed iceberg for each of us, and the idea was to test the same amount of the same product in each spinner. We rotated around so we all tried them all. Asked to ‘pretend that the cameras aren’t even there’, it was pretty funny trying to chit chat about salad spinners, while seeing the rest of the class off to the side making faces at us. 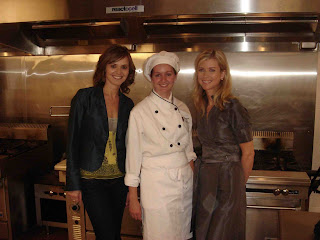 The two hosts and I: how fun is it to be on TV after cooking for 3 hours, then these two beauties show up toting a makeup lady? Yikes. Would it have been bad if I slipped her a $20 to powder my nose and make me look slightly less ridiculous? 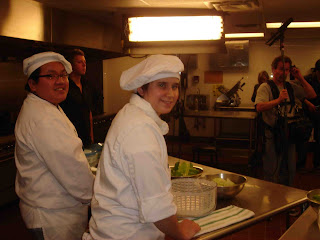 Two of my classmates during the filming
By the time the camera guys had packed up, the rest of the class had taken off, so a few of us had to stick around to finish cleaning up (since they’ll scooted in while we were still cooking, we couldn’t do our cleaning routine). Blessing in disguise: we were still cleaning when the next Chef came in to set up for her class, and she asked us to help her set up. Turns out she had a guest presenter to demo fruit carving, and she invited us to stay. Check this out! 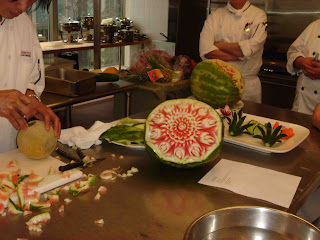 He did this watermelon in just over 10 minutes! 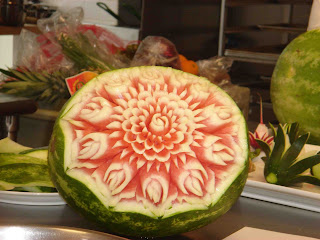